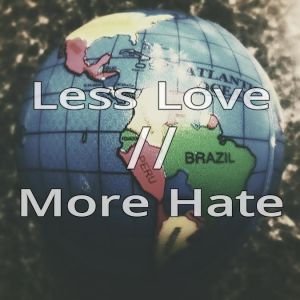 When sleep doesn’t come, I drift off into these wild and crazy daydreams as many of you know. Most of the time I’m the hero of my story. Okay, all the time.  I like the idea of saving the day, or the damsel in distress. That’s as far as I’ve gotten with “the ladies” in a long time. It makes me feel important and worth noticing. But there is always a sense of justice that comes when I’m telling the story to myself. It’s rarely about the fame and fortune I acquire for saving the day, it’s not about the girl who is forever indebted to me because I saved her life. It’s about who I helped.

The society we live in has this “Less Love – More Hate” mantra. Okay, No one has probably ever said it like that, but it is quickly implied. Just scroll down your Facebook or Twitter feed and see how many links come up that are similar to this: “He Stole Her Purse But Wait Until You See What Her Husband Did About It” or “VIDEO: Fight Breaks Out When One Kid Insults Another Kid’s Momma“. The sad part is that we click on it. We want to see hatred happen, we want to see it, but not be a part of it because “that would be wrong.”

This culture is never going to change if we don’t change it ourselves. I’m not necessarily saying to only post pictures of puppies and kittens on your Facebook, even though that is a great Idea. I’m saying, don’t be a consumer of hatred. The less clicks those links get, the less motivated they will be to keep sharing hatred. Look for people to be a positive influence to. Not only on Facebook, but in real life (Yes, there is still a world out there on the other side of your screen.) Be the positive change.